The head librarian of the University of Wrocław discovers the dark history of a Silesia Minor town.

(ZIĘBICE, Silesian Ząbkowice county)  Near the end of December, 1924, despite the upcoming New Year’s, in the markets of Wrocław the sale of pork drastically declined.  One of the vendors, by permission of the Wrocław Butchers, was a certain Karl Denke – a peaceful, sober-minded, pedantic, and devout citizen of Ziębice (at the time, German Muensterberg.)  At the funerals of members of the Evangelist commune, he carried the cross.  He refrained from alcohol and did not have relations with women…  The Christmas holiday of that year in Ziębice was not a joyous one.  On Dec. 25th the Ząbkowicki Journal Frankenstein – Muensterberger Zeitung mentioned, for the first time, Karl Denke as the Ziębice murderer, cannibal, and peddler of human flesh as meat.  On the 28th of Dec. that same year a more thorough account of him appeared in the tri-weekly Muensterberger Zeitung.

Who, then, was Karl Denke, the Ziębice cannibal of dual personalities, not unlike Dr. Jekyll and Mr. Hyde?  He was born August 12th, 1870 into the family of a well-to-do farmer in one of the small Silesia Minor villages, the name of which is not mentioned in historical records.  In school, he was one of the worst students.  He ran away from home for the first time at the age of 12.

A Benefactor of Beggars and Tramps

After finishing elementary school Karl Denke began an apprenticeship with a gardener.  He lost his father at the age of 25.  The farm was taken over by his older brother, but Karl inherited a sum of money with which he purchased a farm and garden in Ziębice.  He turned out, however, to be a rather poor farmer.  He had to sell his land, and with the money he purchased a two-story house with a shed by it, on today’s Stawowa Street in Ziębice.  After WWI he lost his saving due to inflation.  He sold his house, but continued to rent the same apartment on the ground floor, on the right hand side.

Karl Denke enjoyed a decent reputation in this town of 8 thousand.  He led an honest, lower middle class lifestyle.  He helped beggars, and even allowed some of them to stay overnight in his apartment.  It was no wonder, then, that Ziębice Police agreed to give him a vending license.  The peddler sold leather suspenders, belts, shoe laces, etc.  In Wrocław, he also offered pickled “boneless pork.”

On Sunday, Dec. 21st of that same year, around 1 p.m., a man covered in blood came to the Ziębice police station and told how he had barely escaped death in Karl Denke’s apartment.  Police, at first, could not understand how this vagrant by the name of Vincenz Olivier could be accusing such a decent citizen.  Nevertheless, he was given medical attention and the doctor confirmed that Olivier was indeed seriously wounded.  Finally, police decided to arrest Karl Denke.  During interrogation, Denke explained that he had attacked the vagrant Olivier as he attempted to rob him after receiving a handout.  Consequently, Denke was locked up in a holding cell.  That same night, at about 11:30, when Sergeant Palke looked in on him, he found Karl Denke dead.  He had hanged himself on a noose made from a handkerchief.

Shoelaces Made From Human Skin

Only after turning over the corpse to Denke’s relatives did the police – on Dec. 24th – go to his apartment to secure the property of the suicide victim.  What the constables saw in his apartment and shed sent them into a state of terror.

They found several containers filled with pickled human flesh, an apparatus for making soap, and human bones prepared for processing.  On the walls were hanging dozens of belts, suspenders, and shoelaces made from human skin.  The closet was filled with blood stained clothing, among them one skirt.  On the window seal and table were various documents and receipts with the names of people that had been released from prisons and hospitals.

Testing of the pickled flesh performed by chemists in Wrocław confirmed that it was indeed human.  Ultimately, the police were able to identify 20 victims of the Ziębice cannibal.  It is believed, however, that Karl Denke killed, cut up, pickled, and processed more than 40 people.

The Secrets of Madame Curator

These horrific facts from the relatively recent history of Ziębice were brought to light by day manager Lucyna Biały, curator of the archive of old printed materials in the University Library at Piasek in Wrocław.  While going over The Catalog of the Silesian Press, Ms. Biały stumbled upon this macabre story from Ziębice’s history.  She shared her discoveries at a popular science conference in Ziębice.  It was on this report by the Madame Curator: “Casus Denke – The Cannibal of Ziębice” that I based this account.

However, this was not really a “cacus” (an isolated case.)  Let us return to Lucyna Biały’s report.  The author writes, “It is necessary to emphasize that since the beginning of the 20th Century, on German lands, there have been even more perverse, mass murderers.  Names such as Ludwik Tresnov come to mind, who raped, killed, and dismembered four children in the area of Osnabrueck.  Friedrich Haarmann, called the “Butcher from Hanover,” killed about 50 young people and sold their flesh as meat.  He was beheaded in 1926.  A bank clerk, Freitz Angerstein from Haiger killed probably 7 people.  He was sentenced to death in 1925.  Finally, Peter Kuerten, called “The Vampire of Duesseldorf,” was accused of 9 murders and 7 attempted murders.  He drank the blood of his victims.  He was beheaded on July 2nd, 1931.

But, to exploit Denke…?

The mayor of Ziębice, Tadeusz Wolski, was faced with quite an issue.  On the one hand, it was hard to imagine a persona more despicable than Karl Denke, who does not exactly bring positive fame to the town.  But, this executioner’s coin has two sides.  For do not famous murderers, all kinds of torture chambers and other human perversions lure the curious?  A rhetorical question…

“Let us think how we can exploit our cannibal.” says the mayor.  “Perhaps in our Museum of Household Goods in the town hall building, we could give him a little corner?  Maybe we should mark the place where he lived.  Although, we wouldn’t want to disturb the current, peaceful residents of Stawowa Street.”  There are three new houses standing there now, and no longer any trace of Denke’s shop. 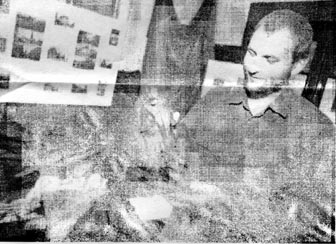 “Karl Denke was a peaceful, sober-minded, pedantic, and devout citizen of Ziębice.” claims Grzegorz Zając, the creator of the Denke exhibit (pictured with the figure of a beggar, belonging to the Ziębice artist Langer.) “– as is turns out, he was a murderer and cannibal as well, who chose beggars as his victims.” 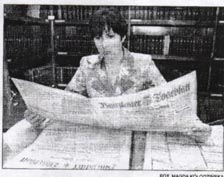 Lucyna Biały, curator of the archive of old printed materials in the University Library at Piasek in Wrocław, after an exhaustive analysis of the Pre-War Press published in Ząbkowice Śląskie and Ziębice, brought Karl Denke, the Ziębice Cannibal, back to life.